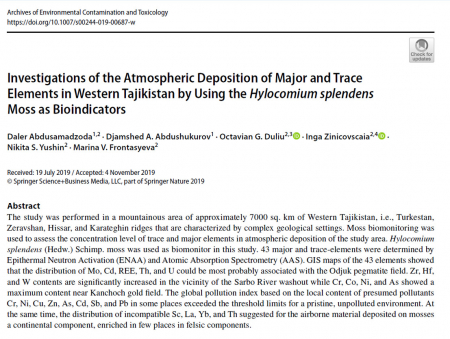 The study was performed in a mountainous area of approximately 7000 sq. km of Western Tajikistan, i.e., Turkestan, Zeravshan, Hissar, and Karateghin ridges that are characterized by complex geological settings. Moss biomonitoring was used to assess the concentration level of trace and major elements in atmospheric deposition of the study area. Hylocomium splendens (Hedw.) Schimp. moss was used as biomonitor in this study. 43 major and trace-elements were determined by Epithermal Neutron Activation (ENAA) and Atomic Absorption Spectrometry (AAS).

GIS maps of the 43 elements showed that the distribution of Mo, Cd, REE, Th, and U could be most probably associated with the Odjuk pegmatite field. Zr, Hf, and W contents are significantly increased in the vicinity of the Sarbo River washout while Cr, Co, Ni, and As showed a maximum content near Kanchoch gold field. The global pollution index based on the local content of presumed pollutants Cr, Ni, Cu, Zn, As, Cd, Sb, and Pb in some places exceeded the threshold limits for a pristine, unpolluted environment. At the same time, the distribution of incompatible Sc, La, Yb, and Th suggested for the airborne material deposited on mosses a continental component, enriched in few places in felsic components.

Read more: Investigations of the Atmospheric Deposition of Major and Trace Elements in Western Tajikistan by Using the Hylocomium splendens Moss as Bioindicators